The Siege of Constantinople (1453) 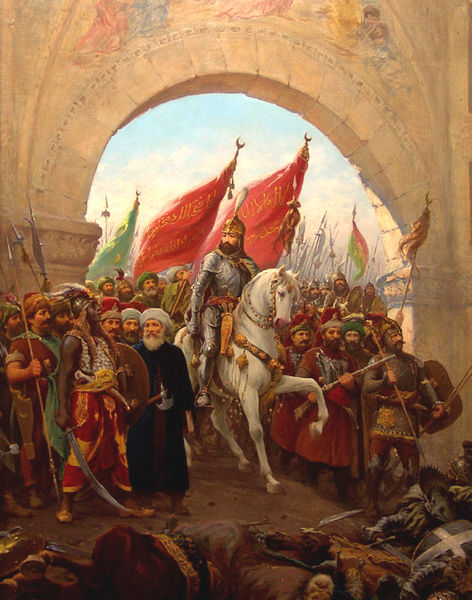 Sultan Mehmed II enters Constantinople
Sultan Mehmed II, the Ottoman Leader, had been mulling over the idea of invading and capturing the city of Constantinople for a long time. Constantinople was the remaining faction of a once large empire known as the Holy Roman Empire. The city of Constantinople and the Byzantine Empire were led by Emperor Constantine XI. The young sultan believed that the city was pregnant with danger and that it could potentially throw a monkey wrench into his plans for Ottoman conquest. The new sultan showed his diplomatic prowess when he signed a treaty with most of the Emperors western allies including the Hungarians and the Venetians. He knew however that these were mostly temporary measures and he needed to act fast to once and for all destroy the half dead body of the Byzantine Empire. The first step of Mehmed's plan was to build a fortress on the Bosporus, an important naval trade link with Constantinople. Once the new fortress, called the Rumeli Hisar, was built the Sultan made a toll that all ships attempting to enter the Black Sea had to pay. If any ship didn't pay the toll then the Ottomans would promptly sink it. This was however a preliminary measure to put the Italian republics under political and economical pressure. For the Constantinople side, help was very limited. Only about 7,000 men fought and they were armed with 26 ships. Several hundred soldiers were recruited by the Italian republics but alas it wasn't enough. The ottoman army began amassing its troop on the plains of Adrianople. The army consisted of well over 150,000 well trained men which included the elite soldiers, called the Janissaries. During the first week of April the Ottoman troops began taking their assigned positions in front of the city walls. The sultan placed his tent near the Gate of St. Romanus and ordered his troops to put the big cannon to be installed in a similar location. The Sultan, following Islamic customs, demanded a surrender of the city. In a dignified reply, the Emperor rejected the Sultans order. Almost instantly, the big cannons of the Ottomans began firing. The Sultans army initially lost a few naval battles followed by the beheading of the Naval General. Despite the Byzantine victories, the defense of Constantinople became weaker and weaker with each pounding of the cannon. The Ottomans began preparations for the massive assault that was set to take place on the 29th of May. The inhabitants of Constantinople, knowing that death was upon them, sang hymns and made peace with themselves. The Emperor met with his commanders and the nobles for the last time and gave a philosophical speech in which he stated that the end had come and asked for the peoples forgiveness for anything he had done against them. The Emperor then took his final battle stance. The assault began after midnight, into the 29th of May 1453. Waves after waves of Ottoman attackers rushed in to attack the Byzantine Defense. The Emperor, sensing defeat, took off his Imperial insignia and charged into the sea of Ottomans. He was never seen again. Just after sunrise the final gate broke and the Ottoman army rushed into the city of Constantinople lead by their leader, Sultan Mehmed. Ottoman flags began to rise up all the buildings in the city. Bands of looters came in and destroyed everything. Killing, raping, looting, burning, enslaving, went on and on according to tradition. The troops had to satisfy themselves. The doors of St Sophia were broken and the angry soldiers pillaged and killed in the holy site for hours. The Sultan and his generals entered the city in the afternoon of the first day of Ottoman capture. He visited Saint Sophia which he ordered to be turned into a mosque. He also ordered an end to the killing. What he saw was desolation, destruction, death in the streets, ruins, desecrated churches.It is said that, as he rode through the streets of the former capital of the Christian Roman Empire, the city of Constantine, moved to tears he murmured: "What a city we have given over to plunder and destruction"(1).